We drive through Greece and discover some empty beaches...

The other villages that we visited in the morning were not as nice as Malovishte but another borek kept our spirit high throughout the day. We spent the rest of the Macedonian money for gasoline as it is so much cheaper in Macedonia than in the countries ahead. The day consisted pretty much of driving and driving across Greece and drinking frappés - they are so good in Greece! An unknown man in a café gave us some peaches out of the blue – somehow we are always getting fed in Greece. In the afternoon we arrived at Paralia Ofriniou. One thing came as a genuine surprise –

there is an empty sand beach there one could also spend the night at. An empty beach in Greece in summer!

In the evening we went further east to the Turkish border (to Alexandroupoli), and there were some empty beaches there as well!

On day 14 we were already in Turkey! The border crossing was the longest so far, the soldiers with their guns were standing on both sides of the road making one feel like a criminal for wanting to cross the border.

Traffic soon started to slow down and by the time we were in Istanbul, it was stop-and-go. A Defender isn't the best car for cities so we parked it somewhere and continued exploring Istanbul by means of public transport.

We stayed in Istanbul for two nights before continuing onward to Cappadocia which we will write about in the next chapter.

Dear reader,
it is you who keeps our site running and helps us grow and bring you more stories from our trips and the local people we encounter. We believe that telling these stories brings the world closer together and is hence a way to make a positive change! Please support us with a small donation on the kofi platform. Even a small contribution makes a big difference!

Berlin to Georgia – Day 16: From Istanbul to Cappadocia

That day we discovered a perfect place to camp in a valley of fairy chimneys! But it was a long way to get there. We left Istanbul at 8 am and at around 6 pm and 750 km behind us we reached the Ilhara valley in Cappadocia.

We explore Ohrid - the most prominent sight of Macedonia, leave the beaten track and by chance discover the most beautiful place in the country. 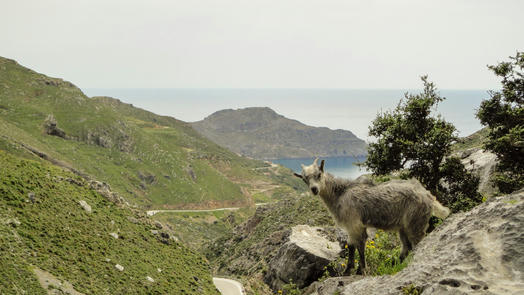 Goats on Cretan Roads - A Story in Pictures

Some things can provide you with access to a certain place: let’s say, wine tasting may be your key to Tuscany, surfing – a key to Hawaii or techno clubs - a key to Berlin. One of the ways to understand the soul of Crete may be through counting its sheep (and goats).

The Most Scenic Cretan Villages

If you read us for some time, you know of our fascination for Cretan villages: so peaceful, so quiet, with the scent of oranges in the air and old people in black sitting in the village taverns. With whitewashed houses nestling close to each other and pots with flowers in the streets, the Cretan villages are incredibly scenic. People of the Cretan villages are usually amazingly friendly. Cretans love sharing their food (A couple of times we got pastry, fruit and a piece of cheese from strangers) and it is fun to be around these people. Don't be discouraged by your basic Greek – ours doesn't go beyond "Hello" - Kalimera and "goat cheese" – katsikísio tyrí.